JUST GAMING AROUND - Vikings on Yucata - Did I REALLY just play a board game online?

I have never really played games online including board games, video games, Facebook games, etc. My only real foray was playing Chess on itsyourturn.com several years ago and only with a friend from work and with my wife's father. Other than that, I have had a general aversion to online gaming and specifically online BOARD gaming pretty much since I started really getting into board gaming in 2008.

When I first started out, one game I played with my friend Chris was called Hive. Man did I LOVE that game. It felt like a fast chess game with interesting mechanics. I immediately went out and bought the wooden version from someone off of BGG (just loved the chunky pieces).

I also tried out the online version against the AI. After playing a few games I realized exactly the strategy it was using to win against me and started doing the same thing but better. Pretty soon I was winning pretty much every game. Then, when I played other people I used the same strategy and pretty much stomped on everyone I played. I quickly lost interest as it had lost it's magic. I was frustrated and disappointed that this terrific game had been ruined for me. I have only played sporadically since then. I'm hoping that eventually the magic will return - we will see. I still have hope.

Since then I have been determined to NOT play games online, particularly against an AI, but even against other players. It just didn't appeal to me, particularly with the bad taste still in my mouth from my Hive experience. I had numerous friends that were playing games online and invitations to play with them, but I generally ignored or politely declined.

Recently I had a great time playing some games FTF with my friend Cary. A day or two later he sent me an email saying he had started playing Vikings on Yucata and that if I wanted to play during lunch or late in the evening he'd love to play. Now, I have heard of Yucata and other such online gaming sites but, honestly, I hadn't even really looked at them - I was aware but purposely ignored them.

For some reason, playing Vikings late in the evening this way sounded fun. I don't know why I had a change of mind. I enjoy playing games with Cary and we'd had a great evening of gaming a couple of days back and perhaps that was...ahem....carrying over. Well, for whatever reason I immediately went over and signed up. I took a look around and set up my account a bit - just settling in and such. Later that evening I got online and sent him a note that we should play. So he fired up a session and I joined.

Email ThisBlogThis!Share to TwitterShare to FacebookShare to Pinterest
Labels: Just Gaming Around

JUST GAMING AROUND - Small World with my son (or, How To Get Thoroughly TROUNCED by a 7 yr old)

My son was sick this weekend but he still wanted to play some games, so who was I to deny him? We played Micro Mutants: Evolution (one of his favorites I think) and I added the Advanced rules for variety and we had a great time (but I won). Then, I taught him San Juan (in preparation for Race for the Galaxy which he really wants to play) and he did very well scoring 25 to my 34 points - he really picked up on the game quickly and he never asked me what any particular card did, he just kept building away and he got excited when he built a 5 point monument! I was very impressed! (but I won).

Finally, I mentioned he'd probably like Small World. My wife had gotten it for me for Christmas and I hadn't even opened it yet. He was very intrigued by the artwork and so we cracked it opened and started punching it. He organized the race tiles into the tray while I punched and then starting reading up on the rules (even though I've played a couple of times before, I hadn't actually run the game)

So, I explained the rules, selected a sample race to show how a turn would go, and he seemed to understand and didn't have any specific questions.

I suggested he go first and he said I should go first (I presume so he could see again how it went). I insisted he go first as the first race was the Underworld Ratmen and would give him ton of units to start with and easier inroads into caverns. So, he selected it and proceeded to occupy a good number of areas.

I then selected Spirit Elves. I figured I would decline them quickly then move on to the next race. Unfortunately, my son proceeded to stomp on my elves with his Ratmen! The dirty little rat ;) ! The fact that he immediately started attacking rather than going for easier territory scares me a bit.....

Anyhow, I felt that declining them now when I had all the units in hand wasn't best yet, so I advanced them further into 'greener' pastures. Of course, he started stomping me YET AGAIN! Arggh! This proceeded for another turn (sheesh, I really should have declined after the first turn) and he continued to get a good number more points than me.

Email ThisBlogThis!Share to TwitterShare to FacebookShare to Pinterest
Labels: Just Gaming Around

I'm glad you stopped by the Board Game Back Room today! I wanted to show you this new game I've had an opportunity to play a little bit and tell you a bit more about it and what I think about it. The game is called "Haggis", was designed by Sean Ross and is published by Travis Worthington's publishing company, Indie Boards and Cards (which also has published Triumvirate, The Resistance and Filipino Fruit Market). 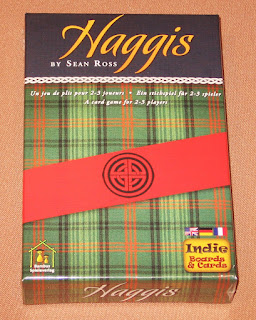 It was originally released in 2010 and was just recently re-printed (2nd printing) in a slightly modified box in 2011. My copy is, in fact, one of the first from the newest batch and can be seen in more detail in my other post of the box opening which I received as a result of a winning bid in the Jack Vasel support auction on BoardGameGeek.com.

Ok, that's enough plugging the company and such....get on with it!
Alright, alright. So, you may have heard this game is Tichu for 2 or 3 players. Honestly, hearing this made me interested as I had played Tichu a few times and found it a fun and challenging card game. For some, this might be off-putting as I know some people that don't like Tichu much at all (although many do) or just cannot play it because they don't have 4 players consistently.

Well, I will start off by saying that, in my assessment, Haggis is both similar AND not similar at the same time. There are certainly elements of Tichu and there is a 'feel' of Tichu, but, I have to say, it is NOT Tichu. I think Tichu players will certainly enjoy this game and be able to get a Tichu-like fix when they don't have 4 total players for Tichu. But, I also think this is a terrific game for non-Tichu players that want an interesting, challenging card game. This might even be a less intimidating game to give a Tichu neophyte a stepping stone to Tichu. Okay, I think I'm done saying Tichu  (I said 'it' way too many times in this paragraph!) but I will say this - Haggis is NOT Tichu.

So, what IS Haggis?
Haggis is, well....Haggis! It is a careful blending of mechanics and features of several card games in the 'climbing' card game family, plus a couple of innovations thrown in as well.