Well, here it is in my grubby washed and dried little hands - DOMINANT SPECIES! I've been lusting after it since before it became available. But even with all that lusting I was waiting to get it as it's a bit pricey and I hadn't had a chance to play it yet. I also felt that maybe the wooden cubes didn't do the game justice - I thought: "It's a game about animals killing each other, right? Not little cubes eating other little cubes!"
Then I got to play it recently and I couldn't resist getting my own copy! And, I found it for a 'decent' price (note: it was still a bit pricey, but I at least got it with another good game and free shipping). Now that it has arrived, I just have to get it played some more!
Not knowing when I'd have a larger group available (because some people I know are afraid of playing it), I did some research and read that it was actually pretty decent as a 2-player. So, I tried playing it 2-player with Bob but I think it was a little too much for him all at once (and a little late at the time we started). I think he'll get it but we might need to start it earlier in our gaming session to give us enough time to spend on a solid full game. I think maybe with another player or two might be good as well, just for some balance...
Oh well, I know I loved it my first play and can't wait to get it to the table again!
And, if you have any reservations about the price in regards to getting it yourself, I will say that it's DEFINITELY worth it - it has terrific components and TONS of wood bits. Some people may be disappointed that it's just cubes and cones, but the designer admits in the rules that it's abstracted, so I'm totally fine with it. The box is beautiful as well with a shiny smooth finish and it feels very solid. OH, of course it's a good game, too!
If you like area control in the vein of El Grande and/or action selection in the vein of Age of Empires III, this game will be right up your alley. Or if you're into animals eating other animals (well, I have to admit that animal eating only happens a little bit in this game).
Note that this game is NOT a simulation (try American Megafauna if that's what you want) and it's NOT a wargame (even though it's published by GMT) but it IS a fairly heavy and long game. The great thing is you're fully engaged pretty much the entire time and you won't notice the time going by at all. (Well, unless you're playing with cro-magnon man, aka. APe man - HA! Sorry, it's late...)
Ok, so, here's my box opening to give you a nice view inside:

Cutting in (carefully).....notice my technique of cutting at the corner then peeling back the shrink
carefully from there.... and then ripping it off like a teen in heat! 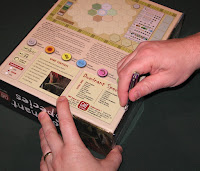 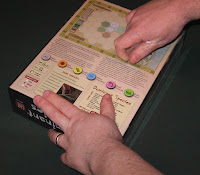 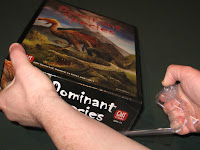 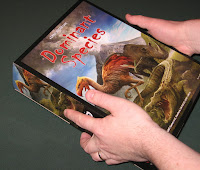 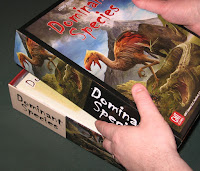 A smooooth opening...and the resultant whiff of fresh cardboard!

I love pulling out the rules and having them look perfect and unwrinkled. I sometimes dread even reading them for fear of getting those little creases you get when holding it opened. I especially dread when I keep my rules perfect while carefully reading, then someone else comes along and grabs the rules, pulls them opened, perhaps bends them back and then flips them around and I can see all these little wrinkles forming. They drop it on the floor accidentally or set them down near their drink. GAH! (that's just in my head).

Ok, I'm exaggerating. A little. See, this is one reason I like to make my own player's aids. And laminate them. The other reason is because my son likes to put his hands down his pants and then grab game components. After grabbing his own components. Eech! He isn't going anywhere NEAR this game...

Now that's what I'm talking about! A sealed board! Which reminds me I need to get some plexiglass....

But alas, I broken the seal and checked out the very large game board:

The colors are definitely muted down but it's extremely functional. Once you get into the game you wouldn't want it too busy as there's already a lot happening on top of it with all the cubes, tiles and action markers. The only thing missing that I wish it had is a place to put the animals (cubes) when they 'die' and are removed from the board.


Lots of cool bits to fiddle with manipulate!


Well, that's IT! I hope you enjoyed the tour!

On that NOTE, I'd better 'leaf' you to figure out if it's worth getting this game just for the nice bits as well as the game play.

Email ThisBlogThis!Share to TwitterShare to FacebookShare to Pinterest
Labels: Hot Box - What's In the Box?