Back Stock - Games that will be coming to my table soon!

So, I've been thinking about my blog a lot more today. I've come up with a list of general categories and figured out how to tag my articles and display the tags to kind of create sections. I realize that these sections probably won't have any meaning on the Kindle, but if I include them in the Title of each post, that will still 'categorize' the posts anyhow and readers will 'know' what they are getting, so to speak.

I took some pics of my 'Board Game Back Room' and posted a 'permanent' pic on the web blog. Here's a quick shot for the  Kindle readers: 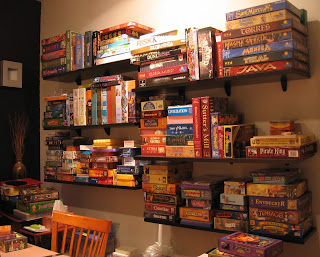 There are more games piled around that I need to organize but you get the idea.


Ok, so I hear you asking: "Where's the discussion about board games? I'm tired of hearing you talk about the blog itself!"

Fine! I packed up 10 totes of Christmas decorations yesterday and 3 totes of lights and outdoor decorations today and really didn't get to do much with gaming but, I realize I must appease you so here's a small taste of what's on my table to look at in the near future. First, a pic of my table: 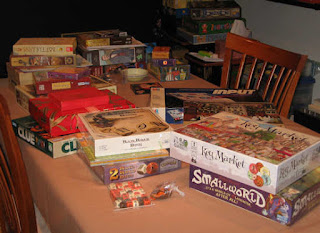 
And a quick rundown of the other games in 'Back Stock'
Phew! I sure have my work cut out for me. I better get some sleep as it's back to my REAL job tomorrow (err...today?) after a 3 week Christmas vacation. <sigh>
by Matt Stevenson (tasajara on BGG) - 2:27 AM

Email ThisBlogThis!Share to TwitterShare to FacebookShare to Pinterest
Labels: Back Stock