Yesterday was my birthday! My 40th birthday! It's hard to believe...I don't feel 40. In fact, I feel even younger the last couple of years what with all the gaming and such as I've been having a blast! I've found something I really enjoy being involved with. And I have made some great friends because of gaming.

For years it was just my wife, me and the kids. I've always had a couple of good friends over the years but they live far away and I don't get to see them very often. I actually wish I could have gotten into gaming 15-20 years ago like I am now, before I was married and had more responsibilities beyond myself because I think I would have put myself out there more and found some really great friends. Yes, I made some friends in my college years but no one I REALLY connected with to the point that I wanted to keep in contact with them. Well, maybe 1 or 2 good friends, but ones that I've since lost touch with and haven't been able to find.


Now I have a whole slew of friends around me that also love to game. That's the great thing about gaming is that it encourages you to reach out to people and get together. It's perfect for a person like me who is more of an introvert than an extrovert. But if I've bought some new games and want to play, I'm motivated to invite people over to play.

I'm not into going to bars or clubs or that sort of thing - social environments with a lot of people really aren't my thing. My preference is for smaller groups of people at a time (3-5, or less) for more personal interaction. But if I get together with a bunch of gamers, even if it's a larger group or a convention, I generally feel comfortable, and if I don't feel comfortable then I can just focus on the game instead, or maybe one or two people involved in the game that I get along with well.

Plus, I've found an online community that, for the first time in 15+ years of being on the internet, I've felt comfortable enough with to want to participate in, that being Board Game Geek. It's a fun site with terrific people, minimal conflict and everyone there wanting to help each other and interact in a fun way.

So, my point with the whole birthday/aging thing is: I may be getting older, but it doesn't bother me at all because I'm having a great time at this point in my life.

What did you get for your birthday?
Ah yes, the question everyone is going to be asking me. Well, let's see...


I got some racquetballs and a racquetball sweat band (it's amazing how much sweat rolls off your head when you don't have any hair!), and 4 new shirts. And, 40 chocolate cupcakes! And, my wife sang Happy Birthday to me a total of 40 times throughout the day! It was funny when she sang 3 times while I was in the shower and 3 or 4 times when she called me on her break, and another few times when she called at lunch, but we were both glad she was done when she hit number 40 at around 8pm in the evening! And, I got a $40 check from my parents. And a call from my sister. And I got some cards. And.....

Oh.....you want to know what GAMES I got for my birthday? Ok, I guess that's what we're REALLY here for, right? 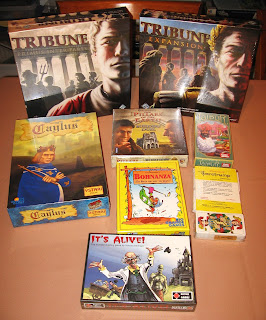 So, we have:
* Caylus and Tarot (from my friend this past weekend - LOVE Caylus, have not tried Tarot yet but gets glowing reviews)
* Pillars of the Earth: Duel from my daughter  (looks like a really nice 2-player game)
* Jaipur from my son  (great 2-player game that I'm looking forward to playing again)
* Bohnanza from my wife   (never played it before so looking forward to trying it)
* Tribune+Expansion (cheap from FF sale!) and It's Alive from myself :)     (have not played Tribune but I love worker placement games. It's Alive is a fun set collection game with an interesting auction element)

Also, when I called my wife when leaving work she said 'take your time' getting home. The traffic was good so I had to stall. Well, of course I had to stop by the local Goodwill to check for any treasures and found Scotland Yard for $1.99:

I've never played before and had read good things about it, so couldn't pass it up at that price! It was only missing 1 Taxi token and the dice.The box and board are a little warped but the components are in great condition.

Neither can you. Now go play a game!

Email ThisBlogThis!Share to TwitterShare to FacebookShare to Pinterest
Labels: Adventures in Thrifting, Back Stock