My friend Bob brought over Settlers of America: Trails to Rails  the other night and we tried out his 2-player variant and again played last night but in a 4-player game with friends Wes and Rog. Bob LOVES Catan and all the various incarnations and we've recently been playing some other 2-player variants (with a lot of interesting elements added).

I got on the gaming bandwagon in 2008 and subsequently played a lot of other different games before I got around to playing Settlers of Catan. Now, if I had STARTED with Catan before some of the other deeper games, then perhaps I would have enjoyed it more. In fact, I found it a bit bland and prone to screwage - as in screwing yourself by poor initial placement and/or bad luck with the dice. I have seen this happen to others as well as myself.

Long story short: I pretty much avoided anything Catan related for a long while. But Bob loves Catan. He introduced me to Catan: The Card Game and I loved it, especially with the expansions. We played that repeatedly over a few weeks. Also, Wes taught me Starship Catan and loved it as well.

Later, Bob started throwing interesting 2-player variants at me and I started to like Catan more as long as it had more choices and luck mitigating options.

I could go on and on about this but this is not a Catan review, it's about Settlers of America.

But, now you understand how I have learned to love Klaus Teuber's designs. I will say I find the games a tad on the long side sometimes. But this is not necessarily a bad thing AS LONG as the game is also interesting and engaging. And, Bob has found ways to tweak them to shorten them up without affecting game play and balance.

So, I was VERY interested in trying Trails to Rails. This game came out in mid-2010 and apparently had a decent showing in Essen as well. However, it is billed as a 'family' game, but I have a hard time believing that. This game has a lot of choices and is very open with a rather large board. You must plan long range and watch carefully what everyone else is doing so you don't miss out on a good opportunity. I think this ultimately will be too much for anyone that is new to gaming or of the younger generations.

The Basics
(NOTE: No strategy is discussed in this blog entry. In the future I will include strategy spoiler alerts if anything is what someone might consider strategy if this is a concern for them)
This game is a lot like Settlers of Catan. You will see the same hex grids with the familiar landscapes but they produce some slightly different resources: Mountains product Ore, fields product Wheat, and forests produce Wood. However, the meadows now product Steer and the reddish-brown hilly areas produce Coal. 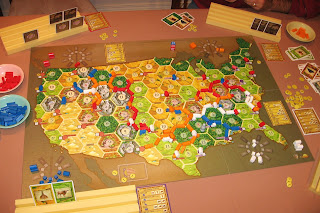 Immediately you begin to see the flavor of this game by these resource types - steer for pulling covered wagons (when you feed them some wheat) and coal for powering trains! And, the map instead is the contiguous United States but covered in the Catan style grids. Familiar city sites pepper the maps at hexagon points near where you would expect them to be.

Similar to Catan you must pay these resources to build things and to buy Development cards. You can build a covered wagon (wood for the wagon, a steer to pull it and some wheat to feed the steer). You can also build a new train (ore, wood and coal), and rails (ore and wood) to move the trains along.

And this is where the real differences start to become quite apparent. You can move your covered wagons and your trains, just as you expect they might. In fact, the standard setup has you running from the east coast and migrating towards the west coast, just like the pioneers did! You must pay wheat to move the wagons and coal to move the trains.

Part of what encourages this migration is that, as you move into city sites next to a region with a double-question mark (??) in it, some of the number markers on the board migrate from the east to the new location. This begin to cause decline of resources in the eastern areas and increase in production in the western locations.

Here's the general flow of what you want to do:
* Build a wagon and move it across the land to a city site.
* Settle in the site (remove the wagon and add a building token representing the city) which also frees up some goods for shipping.
* Build some rail links from an existing city to the new city.
* Send the train to the city and deliver some goods to it.
* Deliver all of your goods to win the game!

And, you do all of this in a very Catan-like way. The city sites are, as noted before, located at various hex corners. These corners intersect 3 resource sites which, after rolling the dice at the start of your turn, produce goods on the matching numbers. But here's an interesting twist: if you don't receive any goods you get 1 gold! These gold can be traded in pairs to receive any 1 resource of your choice. You also earn gold from building rail links to isolated city locations, and for building into cities that have a gold bonus (i.e. cities on the coastal regions that don't have as many resources for the dice rolls)

The rail links you build go along the edges of the hexes just like roads are built in Settlers of Catan. These are the rails you may travel along to get to new cities and deliver goods. You can also pay gold to move across other's rail links to help you get to the cities in need of goods. Once goods are delivered no one else may deliver goods there again. Interestingly, you DON'T deliver to cities you've settled yourself but to the cities of OTHER players instead.

Otherwise, this has the general actions and feel of a standard Catan game: dice rolling, getting resources, trading, robbing with the outlaw/bandit. There are development cards to also help you along.

One element that has changed is that BETWEEN player turns there is the ability to do what is termed an 'extraordinary' build. This lets each player in turn order buy development cards and build wagons, rails and trains. No movement is allowed and no trading (such as trading 2 gold for a resource, or between players).

But, what this does is twofold: 1) You can avoid being hit by the outlaw if a 7 comes up on the dice roll as you might normally be, and 2) It lets you react to the actions taken by the previous turn's player if your turn isn't coming up next. As a LOT of resources are needed to get yourself across the US, this is a terrific addition to the action of the game and this, combined with the wagon/trains/deliver goods system, really makes the game.

Now, I have only described the game in general - I'm not making this an in-depth guide to the game here, just a bit of the flavor of what you will be getting if you play this game.


Next up in Part 2 of this review, I will give my overall impression of the game and then do a bit of description and comparison with the 2-player variant we tried.

Now stop reading this and go play a game!
by Matt Stevenson (tasajara on BGG) - 3:22 AM