THE CREATIVE GAMER - Game Bit Storage Obsession (aka Are You OCD Like Me?) - Part 2/3

Ok, I'm back. And I'm still obsessed. Are you ready for some more? Good!

Acquired from: www.amazon.com (card stock), printed from www.boardgamegeek.com, www.createforless.com (paper punches), Michael's paper craft section (scissors)
Another game I made card stock boxes for is the Catan Card Game. This game has a variety of expansions and they all fit in one box but sometimes it's difficult to tell the difference between the decks when you just use Hugo's Amazing tape to hold each deck separate.
There are several files on BGG (here is one example) that you can print out to card stock, cut out, fold, and glue together to make nice custom-sized card boxes. If you take your time to ensure clean cuts, score the lines and fold carefully, they come out very nice. I even used a 1/2" paper punch to cut a clean half-circle finger hold to make opening to box easier. It actually looks fairly professional when complete!
I will say cutting out the boxes can be a bit tedious. If you try it, I suggest you invest in a nice set of SHARP scissors that are designed to cut paper. I found a nice set

that has a large pair of scissors for doing the bigger cuts and a small pair for doing the smaller detailed cuts. Ultimately, it was well worth the time. BTW, be sure to let the glue dry COMPLETELY before inserting the cards into the boxes if you make them.
JEWELRY MAKING / BEAD STORAGE SYSTEMS
Acquired from: Michael's bead section, www.wargamedepot.com (counter trays)
Many of the boxes I'm showing in this thread have come from the bead section of Michael's where I've found all sorts of interesting storage options. Between the 40% and 50% coupons that are often available and the sale prices that frequently come through, you can usually get pretty good deals on them, too.

Here's another type of storage box I found:
Each small box has a screw-on lid. When I bought this I wasn't sure what I might use it for, but I had a coupon AND it was on sale, so I figured I'd pick up a couple. If anything, I could use it for an art project of some sort.
Well, for Christmas I signed up for the Secret Santa gift exchange. My Santa was PARTICULARLY awesome in that he sent me both Civilization in UNPUNCHED condition similar to one I had in my youth (and which I still haven't had the heart to punch yet) and a used copy of Samurai (an older Avalon Hill war game) which I knew nothing about.
Samurai was used and had a ton of chits all mixed together. I sorted them out into baggies and labelled the baggies. I know there are also war game counter trays but I didn't have any at the time. Later, I remembered I had this box and decided to try it out. It seemed a little strange, but why not?
Here's the filled container inside the box:

I still haven't even had a chance to read the rules so I'm interested how this game plays with the chits in these containers. I'm thinking it might actually be useful because you can grab what you need and place each one near the board where you need it.
If that doesn't work, I can use one of the counter trays I ordered recently:
These trays are obviously designed for war games and all the chits you have in them, but I could see them possibly being useful for other games as well, although I haven't figured out what yet. I like that they are thin and will fit easily into the box with everything else.


JEWELRY MAKING / BEAD STORAGE SYSTEMS
Acquired from: Michael's bead section
Here's another really neat box systems. This is a case with a ton of tiny boxes in it (and a couple of larger ones). And when I say a TON I mean 52 boxes! I think I got the whole set for $9.00 on sale + a coupon discount. That works out to about $0.17 per box!
Here's a look at the case:
Most are tiny or very small, and 2 of them are medium sized. There's even a small bead scoop (not so exciting) and a nice pair of tweezers (this might be useful for chit manipulation!).
However, this is another box set that I had no idea what I was going to do with it. I bought it about a week before EGG 2011. In preparation for the convention I punched out a few games that hadn't been opened that I thought I would like to try. I knew my friend has played Tribune and I thought maybe he could teach its.
When I was punching it out I realized there were a lot of little chits and, for many of them, there were a very small amount of each. Typically, this would mean likely mixing a bunch of them together in a baggie and sorting for each game. Not necessarily a big deal really.
But then I remembered these tiny boxes.....hmmmmm. I tried them out and they actually fit really nicely into some of the tiny and very small boxes.
Here's a look inside the box: 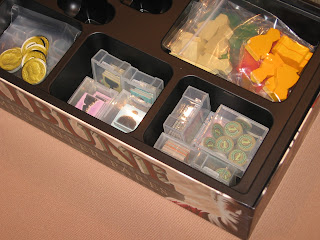 And a closeup of the boxes used: 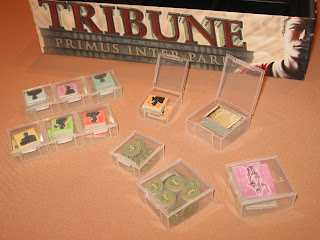 These are nifty little boxes!
VELVETEEN BAGS
Acquired from: www.thinkwedding.com
At one point a couple of years ago I was looking for nicer chit drawing bags, probably for Carcassonne or something similar. It was difficult finding something both nice AND cheap. I finally stumbled across www.thinkwedding.com. They sell 10-packs of velveteen bags for $1.99 to $5.99 (plus shipping).

If you are looking for these types of bags, this is a good place to get them. They are very nice, although I find their largest size - 5" x 7" - is a little tight getting your hand in there. But, in the right application these could be excellent. They also have a variety of other bags as well. Yes, they are geared towards weddings, but that shouldn't stop a geek from ordering some!

I have only used some of my bags so far, The best use to date was for storing Blokus Trigon pieces:

I also did the same for my Mom's copy of this game when we gave it to her.

Believe it or not, I have even MORE storage solutions to talk about and will cover several in the final installment of this series of blog posts. Please come back to check it out in a couple of days!

Email ThisBlogThis!Share to TwitterShare to FacebookShare to Pinterest
Labels: Adventures in Thrifting, The Creative Gamer