THE CREATIVE GAMER - Game Bit Storage Obsession (aka Are You OCD Like Me?) - Part 1/3

In the last year I've been having fun pimping out games, upgrading them and looking for better storage solutions depending on the needs. In the course of doing this I've actively been seeking out a variety of game bit storage solutions, in particular small boxes of different varieties, plastic and otherwise.

I should back up a BIT and say that I'm OCD about game bit storage. As soon as I get a game and punch it I always have to bag each player's pieces separately, then bag all of the various chits, cubes, meeples, etc, separately as appropriate.

And, I'm one of those people that has to come to the rescue of a friend who comes over with a game and doesn't have it 'properly' bagged. I will pull out my box of baggies (yes, I have a special box just for baggies) and my Hugo's Amazing Tape

(for keeping cards together) and get them all set up. Ahhhhhhhhhhh! Nicely organized!

What irks me more than anything is doing a trade or purchase of a used game, have it shipped to me, and have bits and cards all mixed together and floating around in the box! Don't any of you other gamers care about your bits like I do?!

Alright, I'm ok now. So, let me show you how far I go to get my games organized.

BAGGIES
Acquired from: www.boardsandbits.com
First, here we have the standard array of baggies that I'm sure you already know quite well (and if you don't, well, look CLOSELY, this is important):


The key is having a variety of baggies for different sizes and amounts of components. You can never have too many sizes. In the picture above, in front from left to right we have: 2"x3", 3"x3", 3"x4", 4"x4", and 4"x6". I find these sizes are usually sufficient for a majority of bagging needs. Also, you can see two rolls of Hugo's Amazing Tape (1") - one in blue and one in purple - that I use mostly for holding decks of cards together. Hmmm, I'm getting low, I better buy some more!

Baggies in use:
Games like Stone Age are really good to use baggies in - there are a good number of components but not too many of each. Setup and cleanup are pretty easy with baggies for this game.

SMALL PLASTIC CONTAINERS
Acquired from: Dollar Store (via friend)
So, baggies got me by for a long time. However, one day my 'friend', Chris, gave me about 30 nice, clear, plastic containers that he found at his local Dollar Store - 10 for $1. Rectangle boxes! And round boxes! With nice snap-on lids! I was hooked! Or rather, I soon would be. (Yes I blame him for my game bit storage obsession, although I probably would have stumbled into on my own anyhow. It's always nice to have a scapegoat...)


They were really nice and I was excited about them, but I didn't really use them....at first. I figured they had to be for a game that really needed them. But eventually I figured out a great use for them in 2 games that I won from Tasty Minstrel Games -- Homesteaders and Terra Prime. Both these games have tons of little chits and wooden bits.

I later used some of the other containers for other games as well once I found the right fit for them, but these were the first games I had that I felt would really benefit from such storage.

TIN BOXES
Acquired from: Michael's checkout counter
About middle of last year I picked up a combo box of American Megafauna / Origins: How We Became Human. American Megafauna has a LOT of player pieces (thin paperboard 'tents'). I think each player has something like 56 of them. For AM you also need to provide something to use as genes (which are used for bidding on cards). Origins also comes with some colored cubes that are used for the player populations.

So, I needed a total of 5 boxes for player tents, a box for markers I was adding to AM, a box for the genes, a box or two for the DNA markers and cards, and a box for the Origins cubes. When shopping at Michael's (craft store - side note: sign up on their site for coupon notifications) I noticed at the front counter they had small, not-too-tall metal tins which apparently were used for gift cards or something. They had interesting leaf designs on them which I thought fit the theme of American Megafauna and also might hold the tents and other pieces nicely. AND, they were on sale for only $0.99 each! I also found a couple of small plastic boxes I thought might hold the cards and DNA markers.

After some fiddling around with the boxes and other bits, here's how everything ended up fitting into the box:

Notice I used the natural leaf designed boxes for the player tents, a box with dots on it for the round glass board markers, a colored box for the colored cubes for Origins, plus a slightly different 'natural' one for the gene markers (upper right - also note the gene markers are special round, flat, stone 'beads' that I also bought at Michaels because they looked like interesting options for the bid markers). Also I found two fairly open plastic boxes (at top) that were roughly the same rectangular dimensions but were taller to accommodate all the cards and also can hold the DNA markers. AND, they all managed to fit in the box with all the boards, card decks, and instruction manuals.

Overall, I'm pretty happy with it. Now, I just need to get some time to actually PLAY the game :)

even though some actually are not of the Plano brand, so if I say Plano, realize it may not actually be a Plano box. Last year when I made a Boards and Bits purchase I noticed they had some inexpensive Plano boxes available, so I bought a couple of different sizes not knowing exactly what I was going to use them for, but figured they'd come in handy at some point.

Here is one of the boxes I purchased:

The beauty of such a box is that it simplifies setup (and cleanup). They are flexible in that you can usually move some of the dividers around to accommodate smaller or larger pieces as necessary.
At some point a while ago I had picked up a (very) used copy of Agricola (in German no less) for only $16 from a BGG auction. It sat for a long time unplayed, barely even looked at. It had paste-ups for the standard decks and those were sleeved. It also came with plastic boars, cows and sheep! But the standard cubes were not there (no biggie) although the standard discs for players and resources were all there but unstickered. The box was somewhat falling apart and it was rather crowded inside, even when only using baggies for everything (and using baggies was kind of cumbersome as there are so many bits for this game).

First, I decided I needed a Plano box for the bits. Of the ones I'd ordered I tried a couple and only one really fit all the components comfortably. The only problem was the Plano took up practically the ENTIRE standard box. As I liked the Plano so much, I decided I needed to upgrade the Agricola box itself. I bought a 14" x 14" scrap book box (from Michael's of course). There was now plenty of room for all the boards, the Plano, and all the cards down one side (plus more room for any future expansions I might pick up).

Here's how the box looks with most everything in it:

Of course, being the bit fanatic that I am, I also had to sticker all my resource and player discs. And, yes, I bought paper punches to get them to look uniform (purchased fromwww.createforless.com - a great source for a variety of Creative Gamer supplies)

Here's Lost Valley that is using that Plano box I mentioned earlier:

I love Plano boxes but sometimes, but only when they are warranted. They are definitely overkill for some games, or it's preferential to just have the bits in separate containers for easier adjustment of the game layout.

Take the next game for example...


CARD STOCK BITS BOXES
Acquired from: www.amazon.com (card stock), printed from www.boardgamegeek.com
A game I bought early last year called Shipyard has a TON of small chits and they tend to create messy piles on the game board when placed in their designated locations. The chits cannot be stacked easily because they are so small and they tend to mix together with the neighboring piles as the game goes on.

In searching for a storage solution I found a file on BGG that you can print onto card stock, cut out, and assemble into cool little boxes.

Here is a printout of half a box: 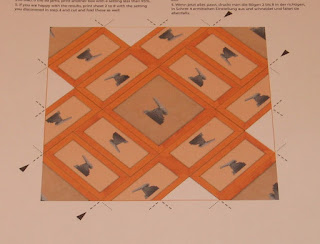 And here are finished boxes in action:
Actually, you are supposed to do two halves and print up one set to be slightly bigger than the other (i.e. by a few % difference) to make lids, but I've only got the bottom halves done so far. This is technically sufficient for game play but I want the lids to keep them safely separate. Ah, more work ahead of me I guess!

These are terrific little boxes because they fit the game board spaces perfectly. It makes setup and cleanup simple for these pieces. Another nice design touch is there is a picture of the appropriate chit on the side of each box so you can easily see from across the table which box you need to reach into.

Of course, there are a bunch of other cardboard tiles and I again leveraged a Plano type box to remedy the storage situation:


In the bottom row, you can see the ship tiles have specific ends and middles and are typically kept in separate stacks on the board. With this case, I can just set it up next to the board and it's ready to go! There's just enough room around the tiles to reach in and be able to pull out the next one.
And, with everything in the box there's still room left for all the boards, the manual and printouts. This, of course, is the ultimate goal - getting everything back into the box. In many cases I've been able to do this without getting rid of the inserts, but sometimes you just have to toss them (see my other post for more on this situation). For this box, I kept half of the insert (removing the middle cross-piece)


Well, I have to run off for now, but I'll be back soon with 2 more installments to this series. Have fun looking for game bit storage of your own! (I know you're thinking about it -- don't deny it.....)

Email ThisBlogThis!Share to TwitterShare to FacebookShare to Pinterest
Labels: Adventures in Thrifting, The Creative Gamer