Hello! Glad you could come over today to the Board Game Back Room. I was worried I'd be a bit tired today but I seem to have recovered well from gaming all weekend (and going on a scout snow trip to the mountains). Yesterday was the last day of the 3-day EGG convention here in beautiful Eugene, Oregon and when I got home I was pretty tired, plus I had one of those wake-up-with-a-headache-due-to-too-little-sleep days - the kind of headache that sticks with you all day despite taking Advil every 2-4 hours. But nothing was going to stop me from attending of course! But, that was Day 3. I should start with Day 1.

So, let me tell you about the convention! In fact, let me take you along!
DAY 1 - Friday, Feb 4, 2011 - 11:40am
Arrival at the Red Lion Inn! In through the lobby and down the stairs to the underground convention room. Just outside the door is the traditional EGG sign: 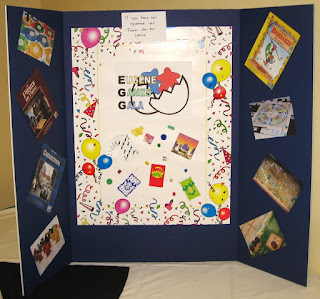 Yes, you have arrived.

As you walk in you see a couple of tables. Lorna's games occupy the first and Bryon's occupy the next table over. Lorna says "Hi!" as you walk in. Lorna is the Chief EGG Head - she founded and runs EGG. Bryon is her good friend that has been helping run the convention since the beginning. They are, in fact, friends with just about everyone that comes to EGG, myself included. It's really nice to come to a convention and be among friends.


This is one of the great things about this convention. People bring piles of games and put them on tables around the outside of the room. It's understood that you can look through them and borrow them as long as you put them back where you got them when you're done. Take a look around. Open them up. Smell them. Touch them. And, of course, get them out and play them!

It's not every convention that affords this level of trust and openness. You will find mostly local gamers here, but there are also gamers from Southern California, gamers from Ashland, Corvallis, Lebanon and Portland, Oregon, and even from as far north as Seattle, Washington.

Here's the room (well, part of it anyway):

The room is about 60' long and about 40' wide. At one end there's ice water, coffee, yogurt and fruit for breakfast and for snacking. Plus, there are at least 8 rectangular tables and 6 large round tables all ready for gaming! I see Crokinole set up on one table and Tumblin' Dice on another.
Well, that's enough for looking around. Now, get your name tag and slap it on. Then, in my case I also bring my own pile of games and haul them downstairs. There is a service elevator in the back of the hotel (well, the kitchen actually) but I just have 2 boxes so make two quick trips and unload onto one of the tables along the wall.
When I arrived there were only a couple of games going and maybe one or two lone wanderers scanning the available games. Shortly after unloading my games other gamers had arrived. There's Chris W and Jeremy and they're looking to play a game.

Chris has interest in my Terra Prime game so I suggest we play! As we start getting it out Aaron shows up (he is one of the organizers of another terrific convention: GameStorm in the Portland area that happens next month) - he has played before so he starts teaching while I set up.


Pretty soon we get the game moving along, zooming our rockets through space discovering planets, encountering aliens (and destroying them, or fleeing as appropriate) and colonizing.
In short order the room starts to fill up. Yes, it's a work day but you can never get gaming soon enough! Today is not the busy day of course, but it will fill out nicely by late afternoon.
Of course, I KNOW the room is filling up but I really don't notice. I'm too engrossed in the game. This is usually how it is for me -- everything else in the room goes into the background when I'm playing. Well, not entirely because I soon see people I know showing up and saying 'hi' or waving. If you've been to EGG before you more than likely have seen a majority of the people before, although each year there are definitely new faces.
I was a new face once, back in 2008. This is my 3rd year and I don't know how I missed out on so many good years in the past.
Well, let's take a break. I need to get up and stretch a bit and maybe get some water....
by Matt Stevenson (tasajara on BGG) - 2:27 AM

Email ThisBlogThis!Share to TwitterShare to FacebookShare to Pinterest
Labels: Conventions